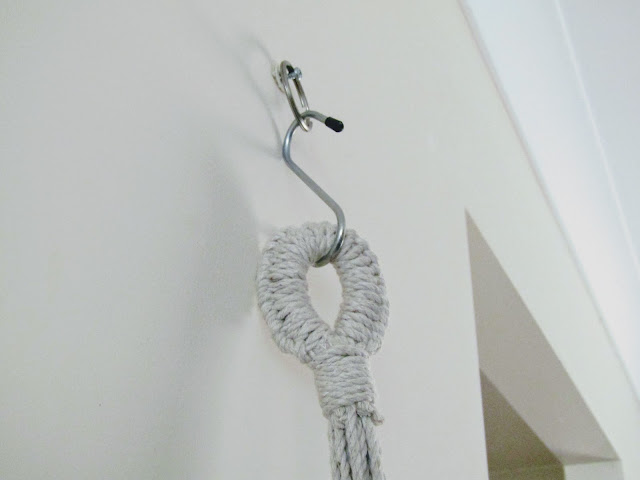 Some of my earliest memories in childhood, was watching my mother make Macrame. I'd see her surrounded by never-ending cord, that would magically get shorter after a while. She made the most beautiful fruit basket holder. It was wide, tall (ceiling to floor) and I could pretend to get tangled in the longs strands. Quite a few times, she told me not to pull on the tail. I could play underneath, if I didn't pull! So I was more than delighted, to try my own hand at Macrame knots, recently.

Using an existing wall hook, I added an empty keyring and S-hook, to hold the piece up. 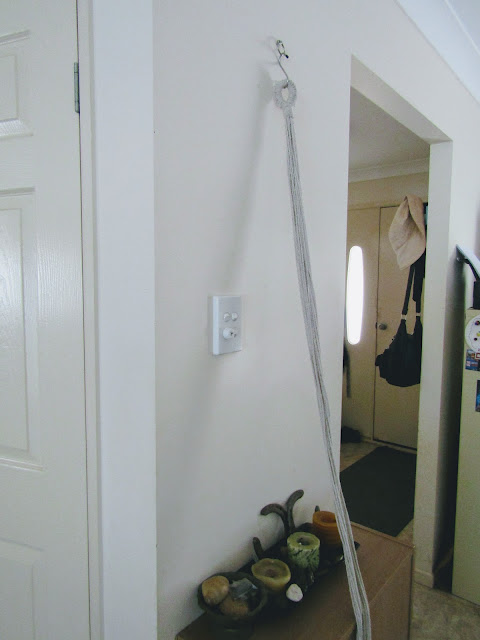 Soon I was to be surrounded by long tails again, as I remember my mother was. Only holding the strands of cord in my hand, this time, I would master the knots for myself. I chose a natural hemp cord, versus the poly cotton blend. Which didn't feel as nice in the hand, and came in bright shades of white. I preferred the off-white of the hemp cord instead.

I purchased my cord from Spotlight, which is a corporate haberdashery store. It was around $30 for 50 metres. It may have actually been more, but using my Spotlight card, gave a VIP discount. They also had a pure cotton cord, which felt nice in the hand as well. In the end, I preferred the colour of the Hemp though. 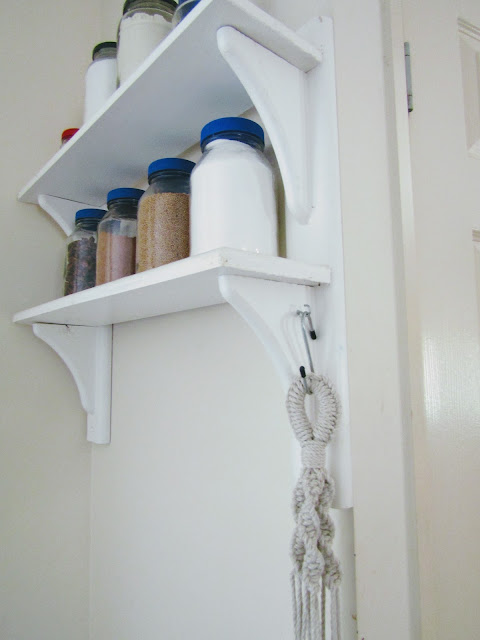 I could make the loop on the counter, but it didn't take long to realise the initial high hook, was hurting my arms to make the rest of the knots. So I decided to relocate the piece, to an existing hook I had on a shelf. I would return to the high hook, eventually, the further down the piece I progressed. But for the beginning, it helped to have it at shoulder level instead. My arms thanked me! 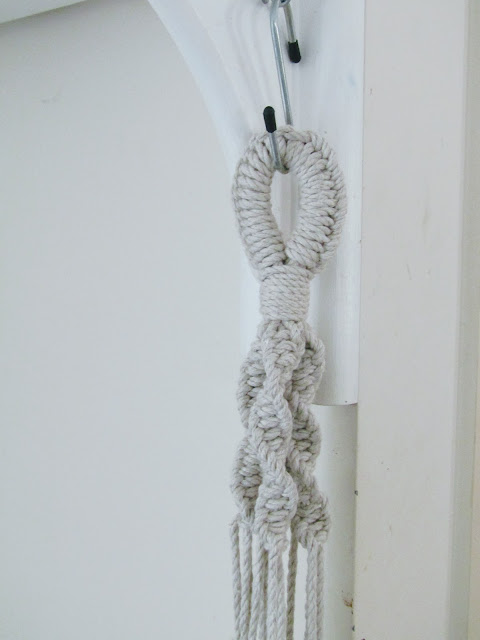 I made my own hook, utilising theLarks Head knot. It's a great way to begin, at the centre of the folded strands. Which is a viable alternative, to using a metal or wooden ring instead. Neither I had, but equally as functional as the corded one I made. The knots strengthen the cord, so you don't have to worry about them snapping under pressure, of whatever you're going to be hanging.

I remember my mother used naked, metal rings for her pieces though. The advantage was a quick start, and ultimately it uses less space on the hook, without compromising strength. But if you're starting off, like I am, the cord is expensive enough, without having to fork out extras. I wanted to know first, if I could actually master the art of knot making.

So what was this all in aid of? 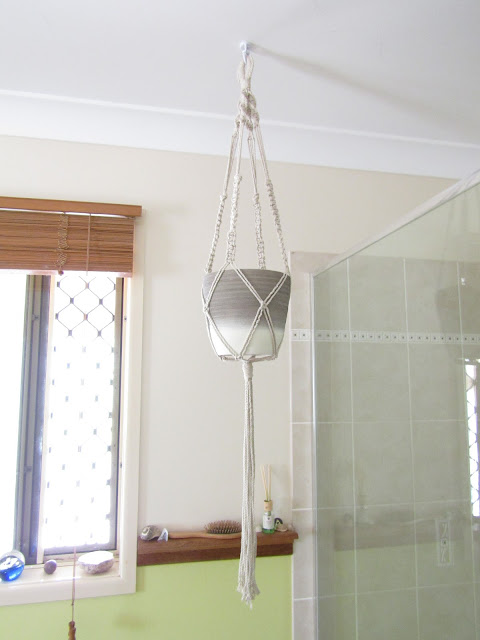 When you don't have a shelf, big enough

I needed a pot-plant holder, for inside the bathroom. I found the sealed pot, at Bunnings, and chose it specifically for this project. The surface, was slightly textured, and the colour graduated too. Which matches the variations in the natural fibre cord. Finally seeing the pot inside the holder though, brought it all together!

And can you guess what my son did, as soon as he saw the long, hanging tails? Yep, he had to explore them, as I had done as a child. My mother's words echoed from my mouth, as I encouraged gentle handling - not pulling. 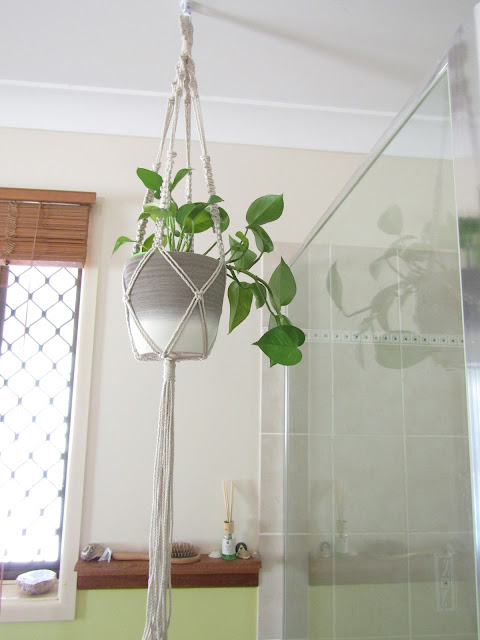 The cover pot is around 20cms wide, which fits an 18cm plastic pot. The plant is a jade pothos, and selected for it's adaptability to handle low light levels. Being on a swivel hook, I can rotate it around, easily enough. It's joining a small collection of plants, I've added to the bathroom. Regular readers would be familiar with the first, viable candidate, to survive long-term, in the same bathroom.

I've added more plants, which I'll share soon - but first, where I got the macrame patten from. Based largely on this pattern, I also tweaked it for the space I was using. As I don't have high ceilings and didn't want heads hitting the pot itself. So I cut the lengths of cord, as per the pattern - except for the eight longest strands. Only needing 4 metres, versus the 5.4 metres, recommended.

This may sound like gobbledygook, but it's for my own reference in case I make another. Nineteen Spiral Knots, from the top, to represent 2019, the year it was made. Twelve centimetres of naked strand, until making the knot, and then 32 Square Knots. I like having a blog, to reference the details of my projects. 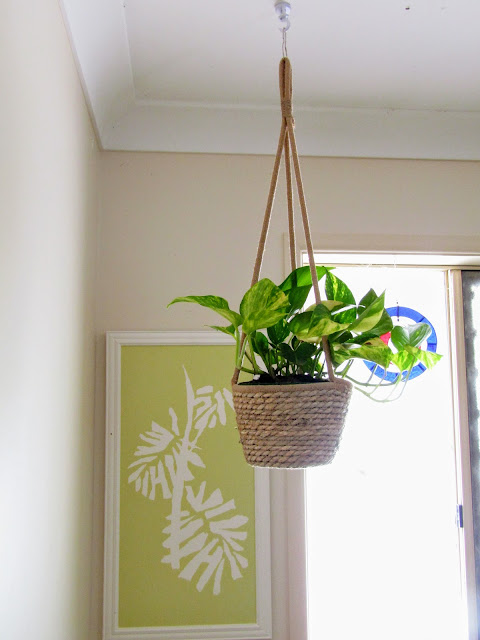 Now onto, the other plants, which have graduated to the bathroom. This is another pothos, which I've heard described as "Golden pothos". But only referenced by a US plant collector, as such. Sometimes we have different common names in Australia, which can be confusing. As you'll see, a little further down.

I actually purchased this hanger (first) from Bunnings, for a ridiculous sum. Over 30 dollars. Which is about the same, as I spent on the hemp chord, later. While ultimately spending more on the macrame hanger, by purchasing an extra cover pot - it will (in theory) last longer than the rope hanger. As it only has a plastic, internal liner, to catch any drips. Should the rope hanger deteriorate, I will have to throw the whole lot away. 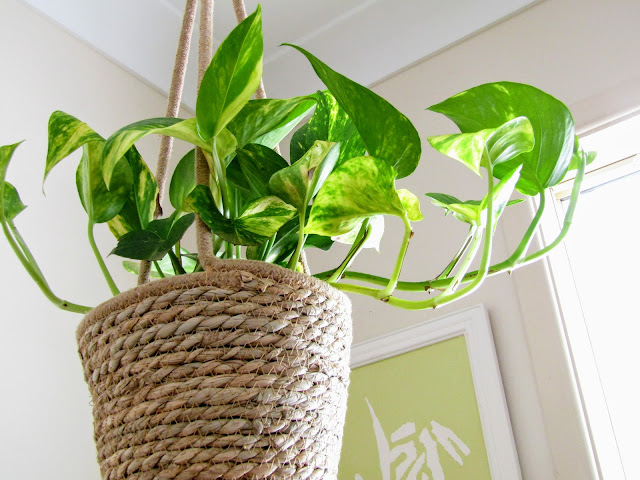 I fell in love, with the organic aesthetic of stitched rope, but ultimately a throw-away item. Including a non-compostable, plastic liner. But I will always have the cover pot, to migrate to another macrame hanger, should the hemp deteriorate with time. Now I know how to make them!

I'll happily pass on the obsolescence, and pay a little more, for a transferable component. But I'm also grateful the purchased rope hanger, gave me a place to start. It showed the appeal of hanging planters from the ceiling, and it's something I wanted more of. Only this time, with fully compostable (or transferable) components. 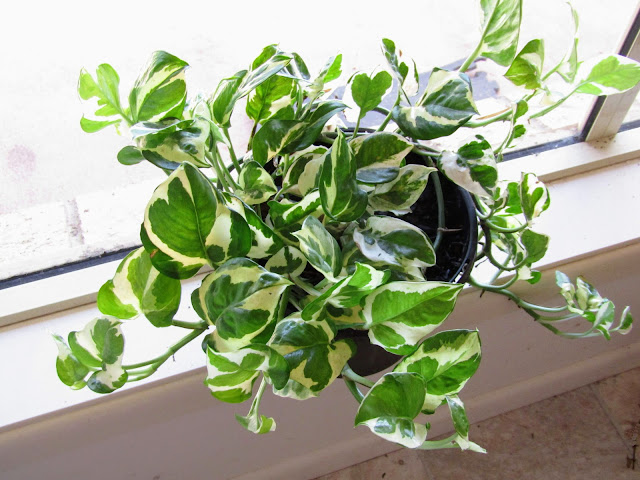 One thing about variegated pothos however, is how it reverts back to its original jade colour, if the lighting isn't good enough. I know the bathroom lighting, isn't optimal, so to remedy this, I have several pothos to rotate out. The original jade plant, in my macrame hanger, will remain permanent. But the variegated pothos in the rope hanger, is changed out every 3-4 days.

The above is known as "Frosty" or "Snow Queen", in Australia. I think I'll just name her, Elsa! but I've seen it referenced as, "Glacier", in the US too. I've had quite a few confused looks, when asking nursery folks what variety of pothos, I'm searching for. 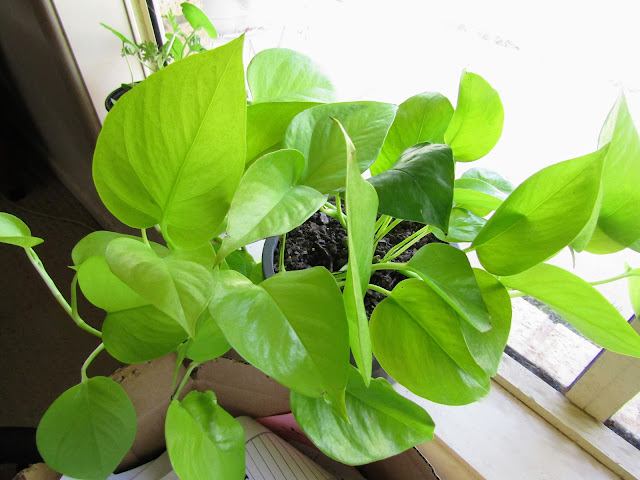 This pothos, for example, is known as a "Gold" variety, in Australia. Not to be confused with the "Golden Pothos" (3 photos up) which is a variegated form, commonly referred to in the US. I have no idea what the variegated, Golden Pothos, is referred to in Australia. As all the nursery folks seem to lump them into the same botanical name: Epipremnum aureum. Or even just under the common name, "Devils' Ivy". Which is frustrating, when asking for the specific variety.

The "Gold" pothos above, is branded, "Neon", in the US. Confused yet? Let's just agree, there's a tremendous amount of varieties to fall in love with, no matter which country you're from. But the lighter shaded leafs (Gold/Neon) and the variegated ones, will revert to the original green - if not given the right amount of light. So watch new, emerging leafs, and move to a new location if necessary. 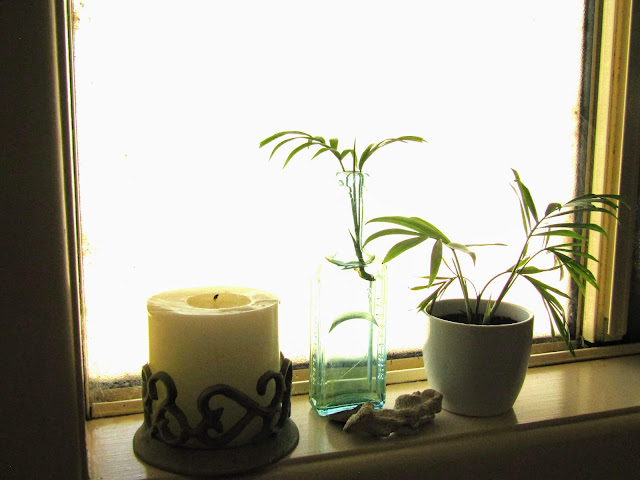 Finally, in the bathroom, is an old favourite of mine. Remember the Baby Panda bamboo, which quickly defoliated? Unlike that, this particular Parlour Palm, actually lives in low light levels. I'll have to write another post, about one I've had for at least 8 years now. This is a new specimen though - actually babies, which were popping out of the pot I purchased, recently.

Rather than attempt to reposition them in the original pot (already bursting as the seams) I separated them instead. Ones with roots, went into a small pot. The one I accidentally ripped the roots from, however, went into a bottle of water. Waiting to see if it will grow roots again!

Being an understory plant, the Parlour Palm should adapt well to this location. 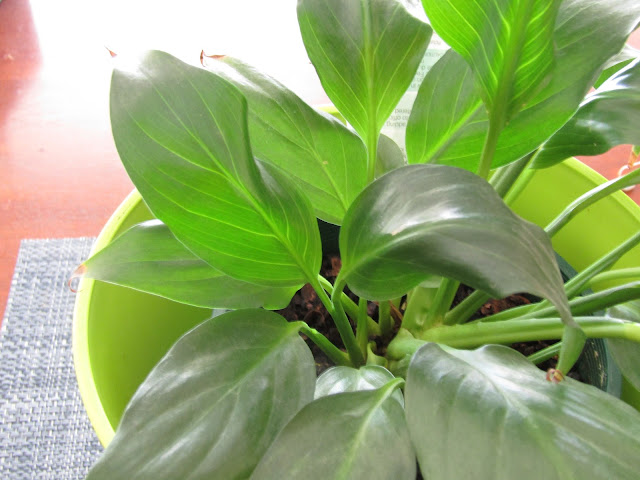 Checking in with my old faithful, Peace Lily (that lives in the bathroom too) and I finally see some new leafs emerging. Obviously, the light isn't optimum in the bathroom, so it's not putting out much growth. Despite receiving seaweed fertiliser, once a fortnight, or so. New strategy, may have to consider switching this plant out, with another plant - like with the pothos. Alternating their time spent in that low-light, environment.

It's surviving in the bathroom, but not advancing. I've actually come a long way, since daring to keep indoors plants again. Fodder for future posts, about the learning process! Basically they're doing well though, and I'm finding solutions when they're not. So that's progress.