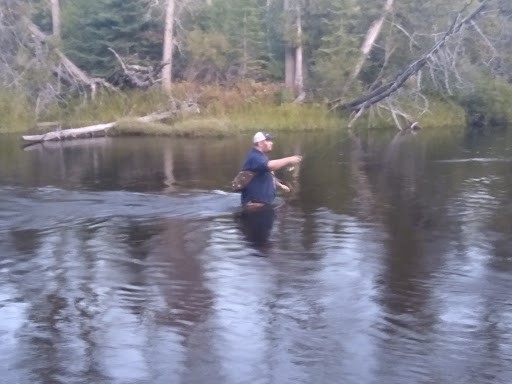 The coffee was hot and the last drop of grease from my sausage breakfast sandwich was still lingering on my top lip as we crossed the threshold of the Zilwaukee Bridge. When you cross the bridge, you kind of know you are up north. Trout of any species were the target and we were going to fish hard for the next two days. We usually leave southeastern Michigan at 2:00 am to get to the river by a little before first light. Michigans Au Sable River is one of my favorite places to fish on this earth and I consider myself lucky to have it located in the state where I was born and raised. The river has brook, brown, and rainbow trout in many areas along the scenic banks of northern Michigan. Its beauty is only matched by its rich history and conservation. 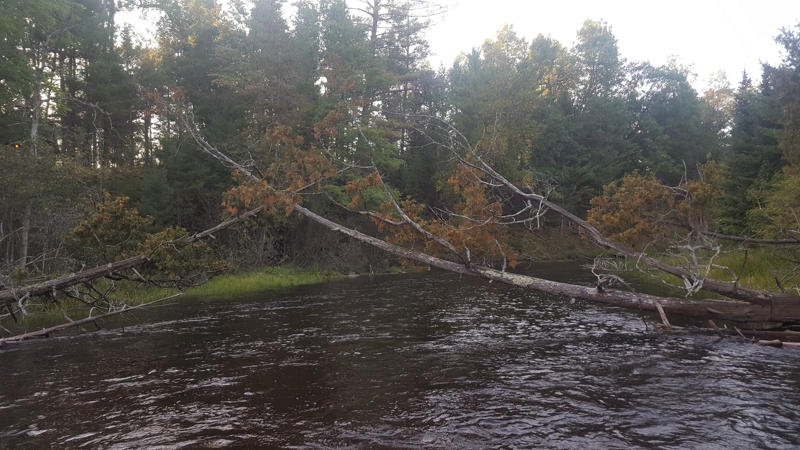 The moment you step out of the car, you are greeted by the wonderful aroma of pine and the kind of air that catches dreams. The ever present bald eagle soaring over the river in the distance or the almost audible hum of the many prolific hatches on this historic water engrain themselves into your memory. Whenever life becomes a little too real, I close my eyes and return to this magical place in my mind. Even just driving to the different places to fish offers a glimpse into the logging life of northern Michigan and the Grayling area. If you are not into fishing, there certainly is enough beauty and history to study but we were here for the fish. A quick stop to the Old Au Sable Fly Shop gave us a bit of insight into the current hatches and water levels. I laced up my boots, put my pack around my back, and started down the steps to take my first step into the sandy, crystal clear waters. Au Sable in French means in the sand and you will find these sandy banks all along the rivers edges. 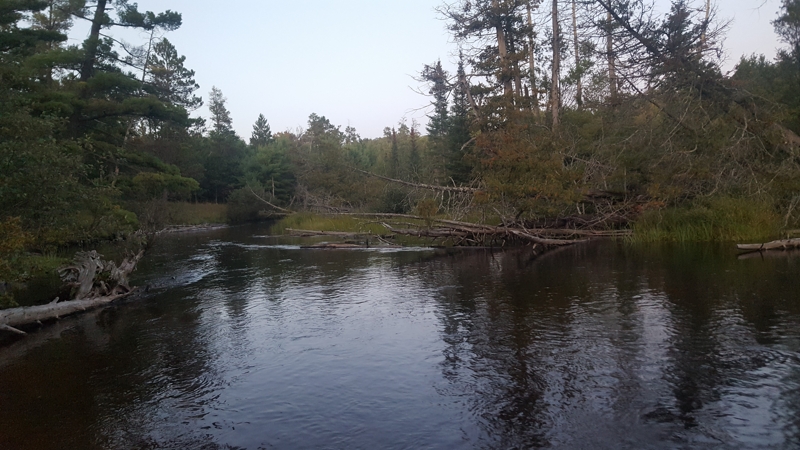 You will often see tiny, delicate insects bouncing around the rivers surface but several hatches stick out in my mind. Early on in the season Blue Winged Olives and Mahogany duns make up a majority of the insect life followed shortly by Light Hendricksons and larger Hendricksons. Into the summer months, sulphurs and March Browns sprinkled in with Light Cahills are normal fare. Drakes and Little Yellow Stones come around with some various Caddis found as well. Towards the end of summer when the nights cool, the mighty Hex makes its appearance, along with Tricos, Sedge, and Ephorons. With all this insect life and hatching, you would think fishing would be easy. Most of the time it is with a dry fly that matches the color and size of the insects on the water. There can be tough times when matching the stage of the insects is more important so always carry a spinner version of adult flies and some different emerger patterns. I would also carry some Michigan classics such as Au Sable Skunks, Joes Hopper, some Para-Drakes, and some Borchers in a couple different sizes. Various nymphs and a few small streamers would also be a good addition to your box when fishing this classic water. 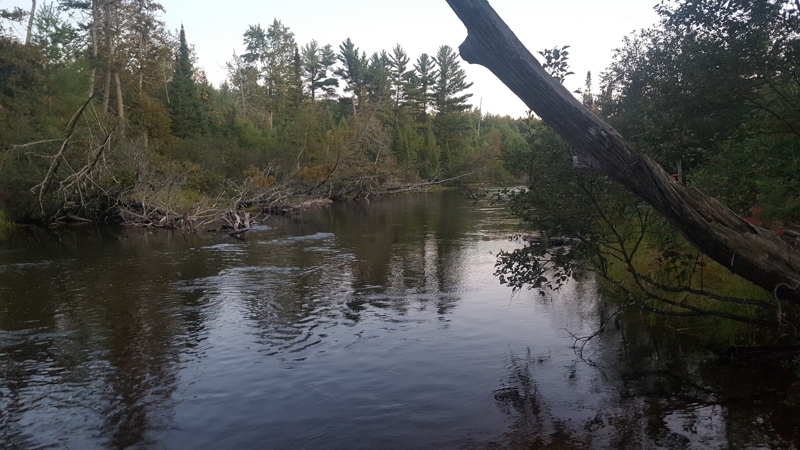 Now that you have a picture of some of the aquatic insect life, lets delve into the history of the water and the area. The Au Sable River runs approximately 138 miles through the northern Lower Peninsula through many areas including Mio and Grayling. The whole area is also great Kirtlands Warbler habitat so for you birdwatchers out there it is quite a scenic venue. The 1870s marked the Au Sable River as a destination for fisherman to fish the Holy Waters. The Michigan Grayling was the sought after species and they were quickly caught in huge numbers. By 1885, the Grayling had disappeared from the Au Sable and the river became a barren wasteland. The logging industry also contributed to this by clearing large areas of virgin white pine. The river was cleared of logs and vegetation where Grayling flourished. Vegetation on the banks was cleared and the river was inundated with sand filling the deep pools in which Grayling use as spawning beds. All of these things took the mighty Grayling from thriving to just a ghost in the shadows. Numerous stocking attempts have proved futile in bringing the fish back to northern Michigan. Hopefully one day, these beautiful fish can be introduced back into the water where they were once plentiful. 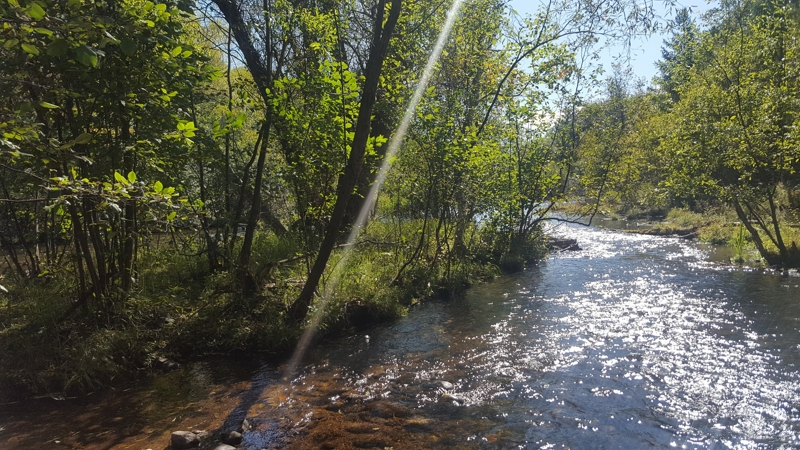 Going brook trout fishing is almost a rite of passage in Michigan if you are a fly fisherman. These feisty little fish can be so fun, especially for people new to fly fishing looking to cut their teeth. The brook trout (Salvelinus fontinalis) is not only a fun fish to fish for but quite beautiful with their articulate red dots surrounded by blue halos. Their fins are also quite distinct with their white, orange, and black coloration. Brook trout have a diverse diet that includes all forms of insect life, small crustaceans, and even aquatic mammals such as mice and voles. Brook trout are for the dry fly fisherman and readily take dry flies of all kinds, as well as, nymphs, and small streamers. The brook trout in the Au Sable are plentiful and very willing to take a fly with small streamers being my favorite method of chasing after these gorgeous, little fish. Since brown trout are also present in some of the same waters, you may also hook up on a brown while targeting brook trout. An added bonus as a lot of the fish are smaller, and a nice size brown trout is often sought after. While the hatches on the Au Sable can be quite prolific and the trout will key in on those, there are times when the bugs are not active or activity is minimal. In the next section, I will go over key areas to fling a streamer or drift and twitch a stimulator to get some extra strikes. 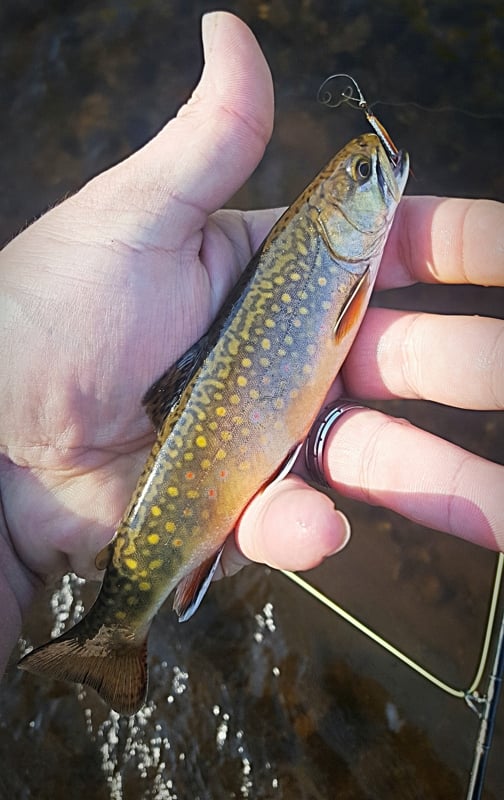 Any time you are fishing the Au Sable, you are going to be looking at some timber. Trout will hide under and behind timber structures and in deep pools off structure of any kind. There will be a lot of riffles and tailouts to fish and where you will find fish will sometimes surprise you. Working flies in a nice drift along timber lines has always been quite productive for me. Side eddies and overhanging vegetation can also be very productive, especially throwing large hopper or attractor patterns. A tucked cast under overhanging branches also has caught me some of the bigger fish of the day when the sun is high in the sky in the late afternoon. One of the common misconceptions is that fish will always be along the banks hiding. Something I learned is to get out of this mindset because different hatches and insects will hold to and hatch from different areas. It will serve you well to take some time to watch the water and the insects and see where the fish are rising. Sometimes it is along the banks or edges, sometimes the main current flow is where they are. Adjust your casts accordingly and mimic the insects position on the water. I know the hardcore fly guys and gals will know this, but I wanted to gear this article to people who may be starting out and still would like the magical experience of catching a natural Michigan trout on the fly. 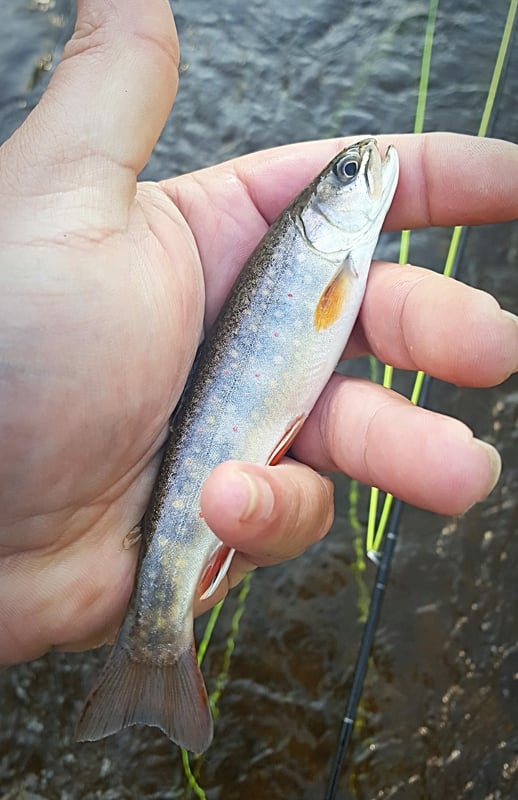 Going Up North has always had a special meaning to me. It gives me a break from throwing arm-sized streamers to smallmouth bass and pike and focus on a gentler, calmer style of fishing. It is the place of campfires, fatty food, and nights underneath the stars. Your worries seem to melt away, whether it is the unmatched beauty of a scenic river, or you are too busy fumbling around with Michigans state bird in the summer time, the mosquito. It is all part of the experience, and a trip that you will not soon forget. I can vividly remember my first Michigan trout, and seemingly every trout since then. You can wake up, light a cigar, and eat whatever you want grease and all. For the very stuffy and prim environment I work in, its a break to be a filthy trout bum for a weekend and revel in every minute of it. Even the porta potties have a stylish charm and sophistication when youve been on the river all day. The sights, smells, and sounds certainly are able to engrain themselves in your brain. Every once in a while you will meet someone that you will learn a great deal from. I met an older gentleman on the river who took the time to share some local knowledge and it was greatly appreciated. I had quite a nice chat before he disappeared down the river and I stayed to fish some rises around me. As much as I can put into words, this river and area of Michigan surely deserves more. The only way to really see and experience all of these things is to drive up 23 and lace your boots up or board the Au Sable river boat and wet a line. 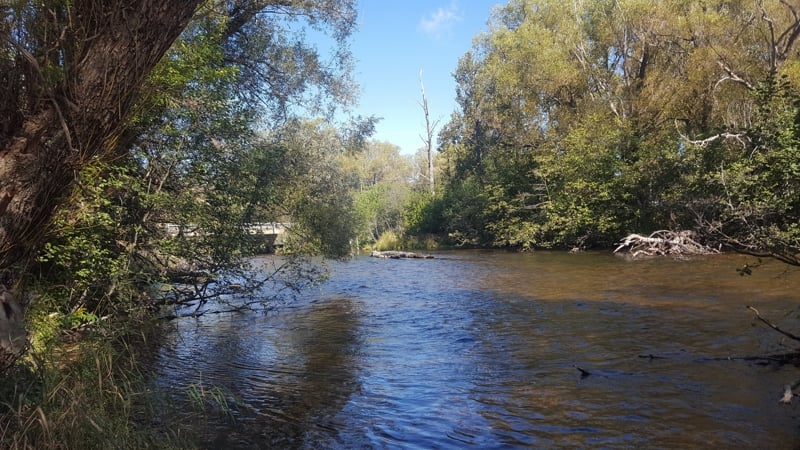 If you want to experience a great fly fishing trip, head up to northern Michigan. Stop by a local fly shop and get some tips or stock up on flies and go hit the water. There are not many places that you can fish that are surrounded by such history and immense beauty. In the winter months, between commercial tying and a couple of fishing trips, my thoughts often drift to that first trip up north to connect with some trout. Whether you are a beginner or expert level, the Au 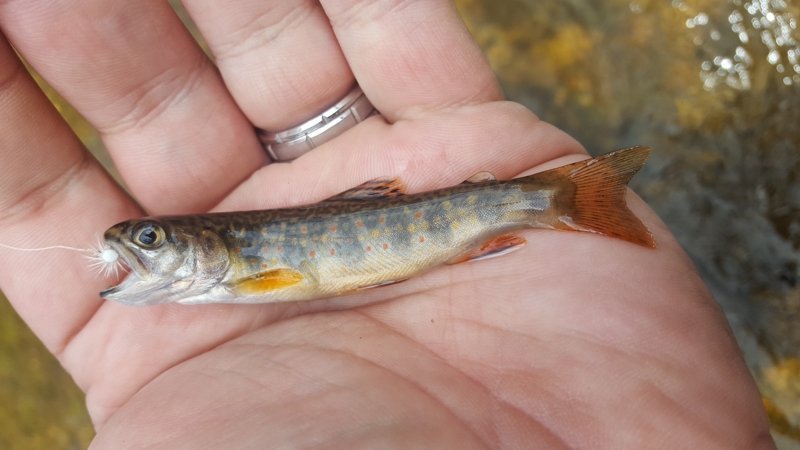 Sable has something to offer. There is an old Irish proverb that says,Listen to the sound of the river and you will get a trout. This couldnt be truer, if you are still and quiet enough you can hear the water talking to you. You can hear all the years of logging, the distinct sound of the Kirtland Warbler, and the trout sipping a mayfly off the waters surface. You may catch some trout and have a good day on the water, or if you really listen to the water you may experience something more.