Captain America was invented expressly to punch Nazis. As long as World War II continued, that worked out just fine. Americans were happy to buy Captain Americamonth after month for the latest red-white-and-blue Nazi smackdown.

But then, inevitably, the war ended. They could have artificially extended the war,M*A*S*Hstyle, but Americans were sick of reading about it by now. Sales of superhero comics dropped while romance, horror, and teen comics surged. All superheroes struggled, but none more so than the Sentinel of Liberty. What was a Nazi fighter to do with no Nazis to fight?

Cap and his faithful sidekick, Bucky, limped along for a few years, fighting the expected slew of gangsters and goofy supervillains, and repeatedly saving Caps not-girlfriend, a government investigator (later reporter) namedwait for itBetsy Ross. 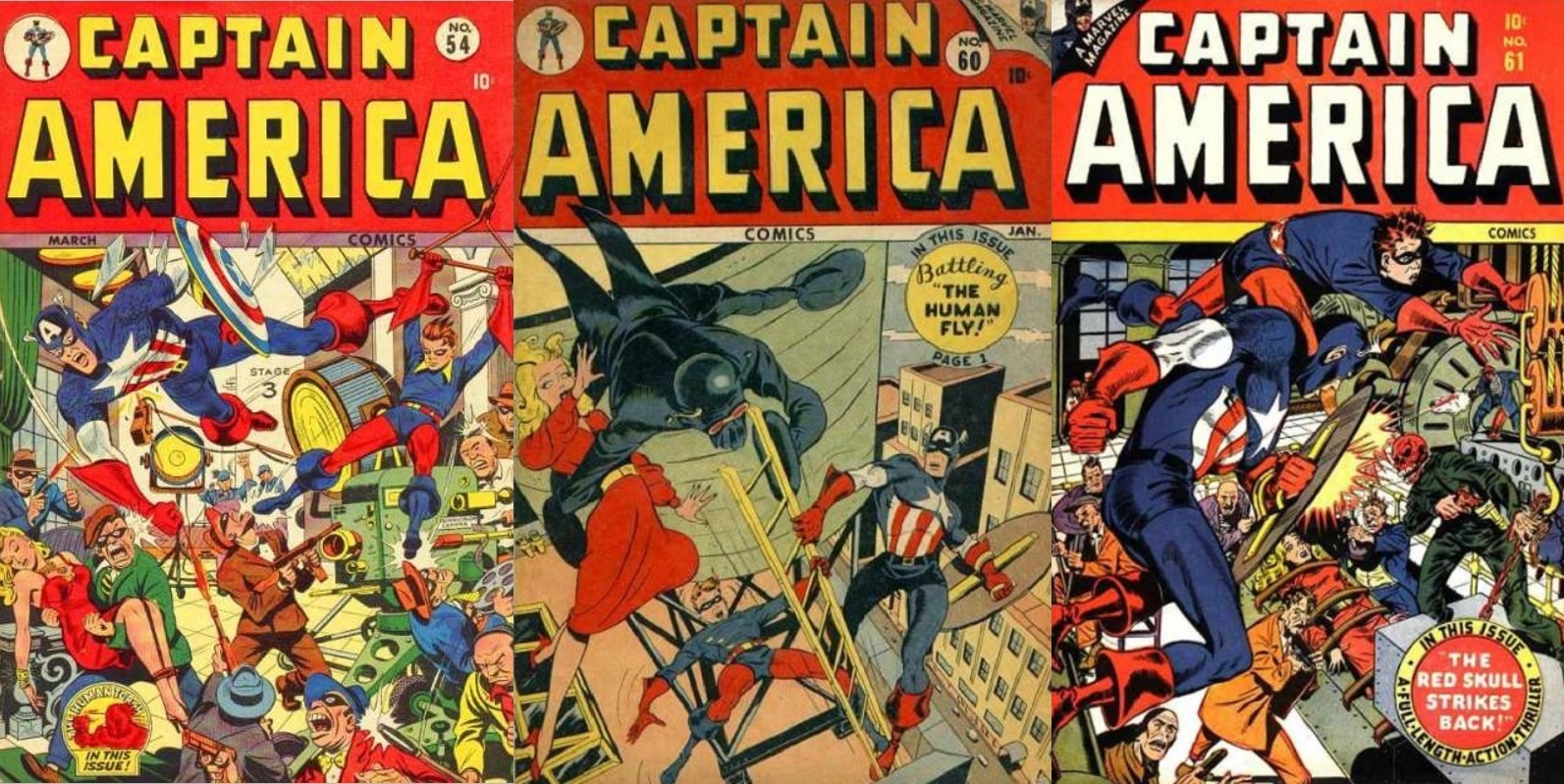 In 1949, they tried to take advantage of the popularity of horror comics by becoming a horror comic. 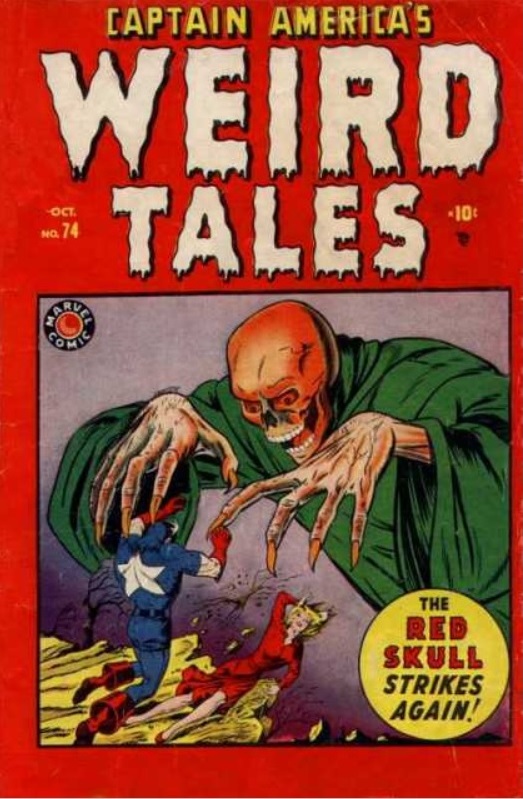 This lasted literally two issues. After that, Cap took a five-year hiatus from comics, returning in 1954 with Captain America #76 and a new mission. By now, America was deep into the Cold War with the USSR. Americans were paranoid about darn near everything: nuclear war, gay people in the government, even comics!

How Do You Say Doppelgnger in American?

Before we get to the good stuff, I should clarify that the Captain America and Bucky of the Commie Smasher comics are not Steve Rogers and Bucky Barnes. It was supposed to be them at the time, but later developments would establish that Cap and Bucky both got, shall we say, winterized before the end of the war.

As revealed inCaptain America #153156, this Cap and Bucky are William Burnside and Jack Monroe, who took it upon themselves to replace the fallen heroes. Unfortunately, Burnside was a wackadoodle so obsessed with Captain America that he changed his name to Steve Rogers, got plastic surgery to look like him, and even injected himself and Monroe with an incomplete version of the super soldier serum. The serum caused them both to go off the deep end, and the government had to put them in cryo-sleep.

As you will see, retconning this Captain America as an unhinged menace to society wasnt much of a stretch.

This stage of Caps career lasted fromCaptain America #7678. Thats 50% longer than the Weird Tales era. It was written by Don Rico, who had been in the industry for 15 years by this point, and drawn by future comics legend John Romita Sr. So weve got both talent and experience behind these stories. Too bad that talent and experience went intothis. 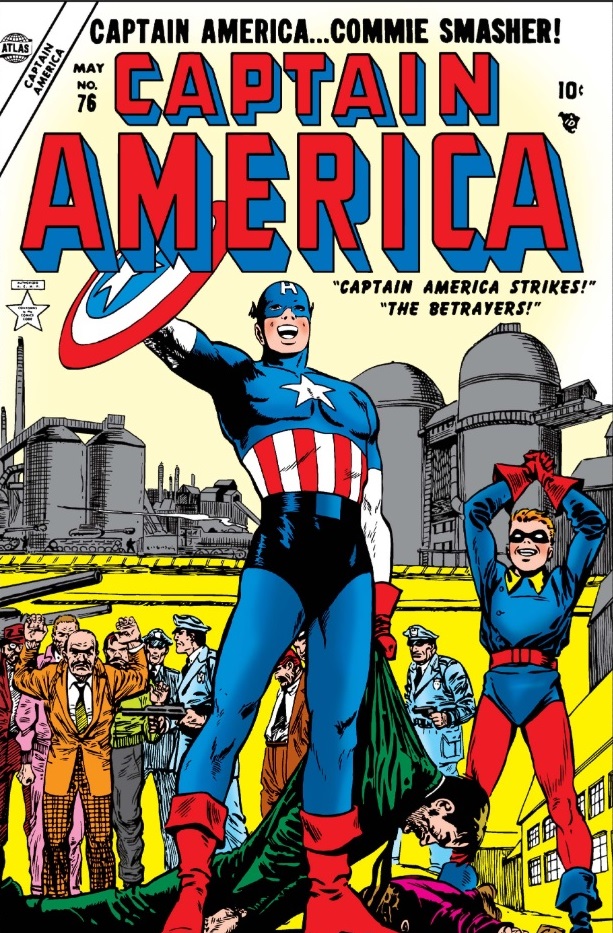 Those faces! Theyre so blushy and happy!

There were three Captain America stories per issue (plus a Human Torch story). Like in the good old days, our heroes travel the world tracking down their enemies, whether they be American spies or European traitors or horrible Asian stereotypes. And yes, every single story revolves around Cap and Bucky fighting communists.

Cap wastes zero time in demonstrating his feelings about communism. The very first story, The Betrayers!, ends with Cap punching a Red spy into a fire and leaving him to roast. 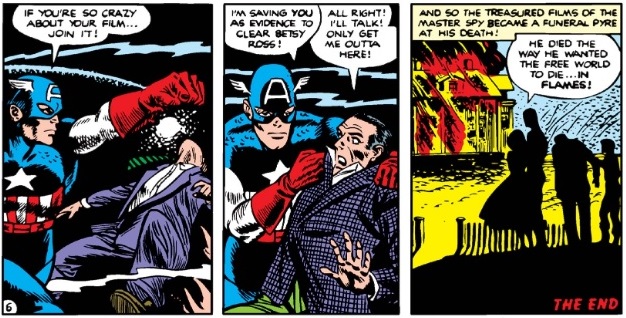 Remember, kids: its okay to kill someone if you make their death ironic

That dude was just some newspaperman, and the material he was about to leak to the communists was already destroyed. Barbecuing him was unnecessary.

You Die at Midnight! is the first story inCaptain America #77, and it somehow makes Cap look even worse. Communist spies are forcing a man to give them important plans or else theyll kill the mans son. Is Cap sympathetic? What do you think? 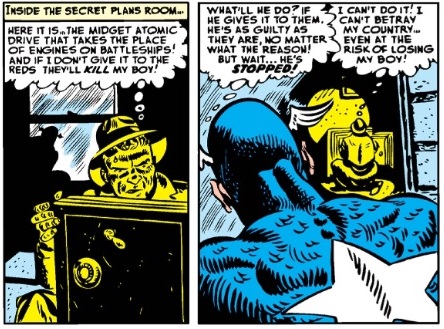 If you love your kids more than you hate communism, Captain America will wreck your life

Cap absolutely could have revealed himself and saved the poor man some suffering. But nope! You must be thisAmerican to be rescued by Captain America.

The second story in this issue features a similar premise. The Man with No Face! sends Cap to Chinatown, where otherwise upstanding Chinese Americans have been threatened into donating to communism. Weirdly, Cap focuses on catching the actual bad guy here rather than squatting in judgement at the victims windows.

I guess by Issue 78 Marvel realized that Caps new direction wasnt working, because they gave him an actual supervillain to fight. Hes still a communist, though. His name is Electro and Cap tries to defeat him with a giant typewriter.

When that doesnt work, Cap turns on the sprinkler system and electrocutes him to death. Ho, ho, more irony! Cap, you scamp.

It was at this point that I got curious enough to go back and read Captain America #13. I wanted to compare Caps body count in 1941 versus 1954. Maybe Cap was super bloodthirsty back in the day and the Commie Smasher comics are actually in character?

The reality is complicated. Actually, I take that back; its just racist. When it comes to the Nazis he fights, Cap doesnt particularly care if his opponents live or die, but he doesnt actively try to murder anyone. Heck, in Issue 2, he comes face to face with Hitler, and all he does is throw him in the trash. 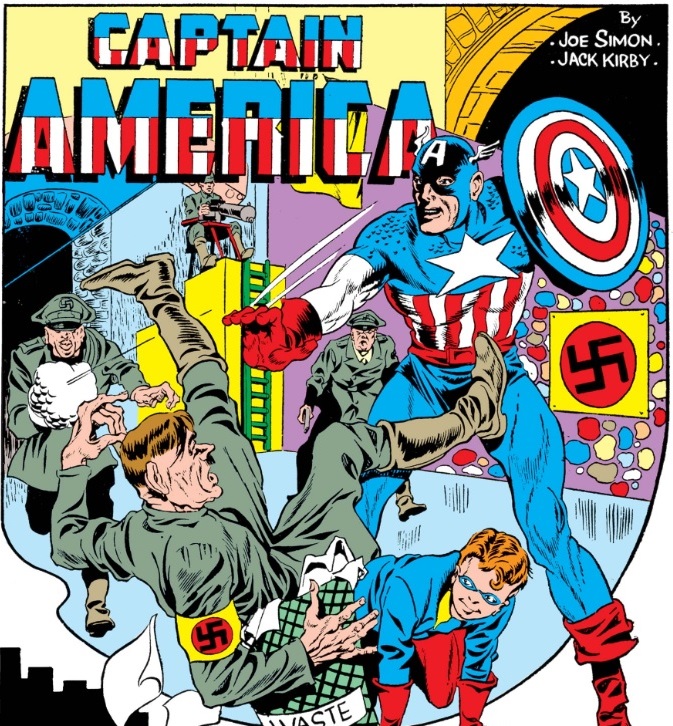 I had no idea Adolf was so flexible

Caps Asian opponents are another story. Also from Issue 2, Cap kills an entire race of Tibetan giants, despite knowing that they were coerced into committing crimes for someone else.And then theres this charming tale from 1944 where Cap and Bucky blow upone million (!) Japanese soldiers without flicking an eyelash. Hed have a lower body count if he nuked Fiji.

So, yeah, 1940s Cap had about as much respect for human life as 1950s Cap. But at least you could argue that the people he killed in the 40s were legitimate threats. The newspaperman from Issue 77 definitely was not, and considering Electro was almost out of power when Cap fried him, his death really isnt justified either.

Anyway, the last two stories in Issue 78 feature a dragon coming to life to scare the Chinese into capitalism and an athlete-turned-spy planting bombs at the UN. Thats an appropriately stupid note to end this series on.

Honestly, I had a blast reading these comics. Captain AmericaCommie Smasher has aged so terribly that its hilarious. Theyre just like the 1940s Captain America comics, but they have communists and are worse. And that was precisely the problem. According to Bradford W. Wrights Comic Book Nation, readers of the 1950s were much less willing to believe the kind of naive jingoism that had always been Caps trademark. Theyd seen a world war and the invention of the atom bomb; the idea of a superhero defeating communism with a right hook and a hammy line about American exceptionalism was too tough to swallow.

After failing at commie smashing, Captain Americawas canceled again, and Capwouldnt make another grasp at relevance for a decade. The next time he (literally) resurfaced would be in Avengers #4 in 1964. By now, superheroes were popular again, offering the good captain a much more welcoming atmosphere than the fatigued 50s. But I think the fact that The Avengers contained100 percent less murder helped.