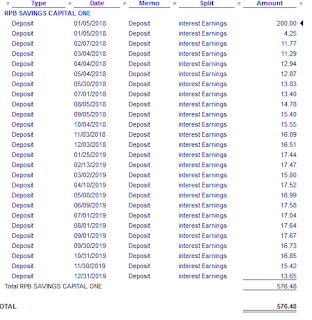 To earn a bonus, open a 360 Performance Savings account between 12:00 a.m. ET on April 16, 2020 and 11:59 p.m. ET on May 31, 2020. If you have or had an open savings and/or money market account (excluding CDs, IRA savings accounts, and Kids Savings accounts) as a primary or secondary account holder with Capital One on or after January 1, 2016, you're ineligible for the bonus. Deposit a total of $10,000-$50,000 or more of new money from an external bank (transfers between Capital One accounts will not qualify) within 10 days of account opening (Initial Funding Period). Maintain the required daily balance within a bonus tier for 90 days following the Initial Funding Period, and earn $100 for every $10,000 maintained (up to $500).

Damn.  Why should the newbies get all the gravy?  Oh, right, to encourage more newbies.
Captial One has low interest rate "plain jane" credit cards, which both Mr. See and I have as backup cards in case some emergency comes up.   As we get older, we need such cards less and less.  But during our working years, when we had little in savings (or "rainy day" funds) such a low-interest card can be handy if you have a sudden "unexpected" expense (which are usually expected, but I digress).  By the way, these low-interest cards are available from Capital One (and most Credit Card companies) but are rarely advertised or promoted - in fact, I am sure they will claim such cards do not exist!

7.15% interest is not a great deal, but then again, I've had mortgages with higher interest rates.  Capital One would sure love it if I took out a "cash advance" though!   Akin to a payday loan!
But seriously, if you have chronic credit card debt or your finances are pretty thin, a low-interest rate card is the way to go.  It is only after you've dug yourself out of the debt hole and gotten your financial house in order (and again, balance your accounts every month, know the due dates, interest rates, and closing dates of all your credit cards and log every goddamn purchase every single fucking day on Quickbooks or some other financial software on your computer - not a cell phone, or some stupid online pie-chart waste-of-time) that you can even think about rewards cards.  And even then, they should make you as nervous as carrying a loaded handgun.
Yes, they also have a "rewards" card - the Quicksilver - which Mr. See has, but rarely uses. I got this for him as I realized most of our credit was with me as the primary credit holder, and that he had few "stand alone" accounts.  Again, rewards cards are like loaded handguns, in that if you don't pay off the balance every month, the interest wipes out the rewards in short order and could end up bankrupting you, or at least starting a personal credit card crises.
However, we travel to Canada a lot, and Capital One has a good exchange rate (no processing fee, unlike Bank of America).   BoA will "waive" these processing fees if you call and are a "Platinum" customer, but you have to call, and it should be automatic.  And as I recall it is something like 3% which is scandalous.   (If you don't think 3% is a lot of money, have your financial head examined).  So when in Canada, we use Capital One.
Why do we still use BoA?  Well, the "rewards" there amount to over $120 a month, with the "bonus" applied for "Platinum" members.  Yes, I am playing the steal-the-cheese game, as I am debt-free and can get away with it.
But when I started this blog?  With fifty grand in credit card debt?  Uh, no.  But that's the problem for most of us plebes.  We go to a financial site or discussion group, and people say, "Oh, you should get a rewards card!   3% balance transfer, no payments for 6 months and you get airline miles!" and people jump on that - after all, it was "good advice" from "financial gurus" - right?
Six months later, they've increased their credit card debt by another few thousand, and now the 22% interest kicks in, pretty much wiping out a year's worth of  those "rewards" points in a single month.
(Speaking of airline miles - they were worthless before, I wonder what they are worth today?  I mean, given that no on is flying these days, and if airlines go bankrupt, you may be little more than a creditor in bankruptcy.   If you go for "rewards" go for cash.   They can't take it away from you - cash never "expires").
But that's why I don't give advice here.    I don't know what your personal situation is - are you mired in debt, or well-off?  Are you still in high school or in the retirement home?  It makes a difference, what your life situation is - so one-size-fits-all advice never works out well.
Besides, what I have found in life is that people seeking advice are either looking to validate what they have already decided (and you can tell this by the way they present selected facts that lead to only one conclusion - or even tell you the conclusion and ask if it is right).   And/or they are looking for someone to blame when it all goes wrong.   "I just did what you told me to do, and now my life is in ruins!" they cry.  Of course, they did only half of what you told them to do (they put money into 401(k) savings, but kept spending like drunken sailors and wondered why they went broke) or they basically lied to you when they presented their fact scenario.
Ya gotta make your own choices in life, live with them, and own up to them and live with them when they go wrong - or right.   Sadly, that seems to be a vanishing aspect of human character these days, particularly with our externalizer-in-chief who has a regular retinue of whipping-boys to blame when things go wrong for him - the media, China, immigrants, Democrats, Nancy Pelosi.
But once again, I digress...
Share Share on Facebook Tweet Tweet on Twitter Pin it Pin on Pinterest
Back to News